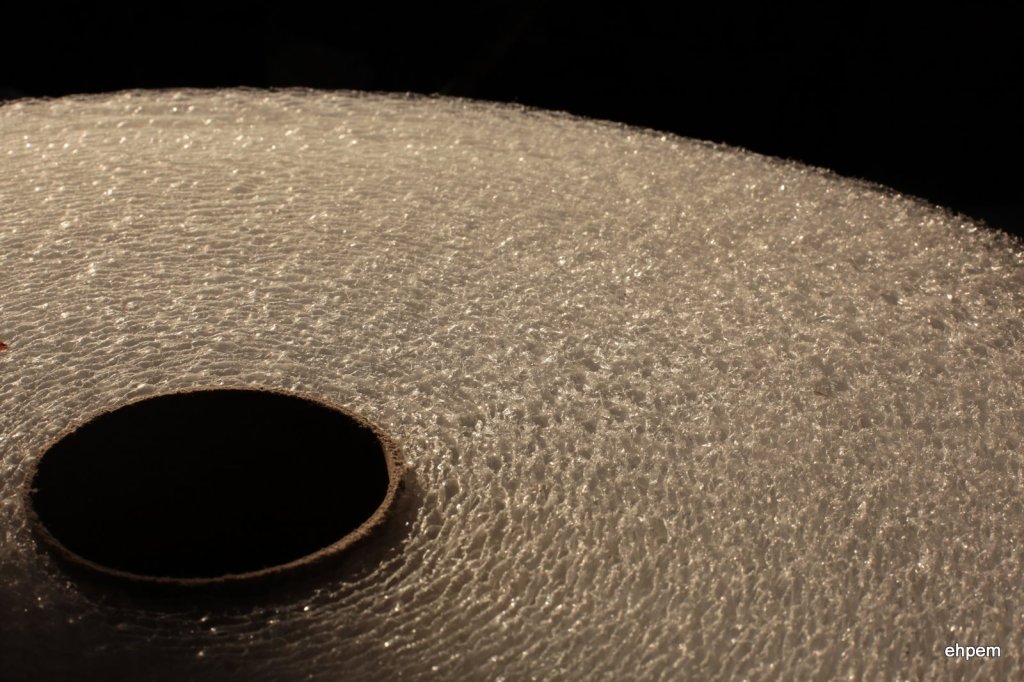 Bubble wrap is a common experience around the world; it seems that many square meters come through this household every year and I imagine it is not unknown in the further reaches of Tibet. It’s pretty cool stuff and works extremely well as protection during shipping. It’s even a fantastic toy for kids, popping air pockets endlessly until the adults intervene (provocation has to half the fun). However, few of us ever see bubble wrap “on the roll”. Well, I think few of us because I had never seen a roll of it until my daughter obtained some for packaging her on-line sales*. Perhaps all my readers have a roll stashed away. This roll was in the carport last summer when a beam of sunlight spotlighted just the top surface against shadowed ivy in the background (don’t get me started on this invasive plague that people actually choose to plant in their gardens). This shot is the result and owes some of its success to the dark background.

Today’s photo is one of few I have access to while my computer is at the “clinic” getting liposuction , or whatever the heck it needs. My guess is that the problem arises from corruption of the FAT**. Those that know me might say that is just projection from a fear of my own corrupting fat, or other less-than-well-meaning comments along those lines (just because they know me, doesn’t mean I have to like them, eh?). Anyway, I like this picture. I think it works better in colour (little that there is) than it does in black and white, and I don’t have access to a black and white version to show you anyway.

Did you know that bubble wrap was invented 54 years ago? It must not have been widely used for a few decades, or else I am telescoping time as it only seems like the last 10 or 15 years that bubble wrap has been ubiquitous in my surroundings.  Apparently, the inventors first made it by sealing two shower curtains together. I wonder if they used old worn out shower curtains, or if they had more faith that something interesting would come of their experiment and ponied up for new curtains. They seem to have liked the outcome enough to market the product (originally they called it Air Cap).

Their first idea of what we consumers could do with it is so fifties that it makes you want to laugh and cry at the same time. They tried to sell the product as wall paper! Can you imagine bubbly plastic wallpaper? What wondrous patterns there must have been on it. Since most shower curtains range from ugly to uglier, and I suspect that 50’s wall paper mostly falls in there too, perhaps that is all we want or need to know.Their next idea (there had to be another) was to sell it as greenhouse insulation. This makes a bit more sense, but evidently not enough at that time of cheap energy. It took a few years for the inventors to discover the true purpose of bubble wrap – its first use as protective wrapping came in the early 60’s when IBM started wrapping computers in bubble wrap for shipping. The inventors have not looked back from there. I can’t blame them for not looking back, they might spot some tatty remnants of their wallpaper. I wonder if any of that first product has ended up in a museum – if so it is bound to be hated by the conservators tasked with the nightmare of preserving it.

I started off with a whine about computer fat and then when I searched for background to make this post a touch more interesting, lo and behold, I find I can tie this image back to computers. Nice when things work that way.