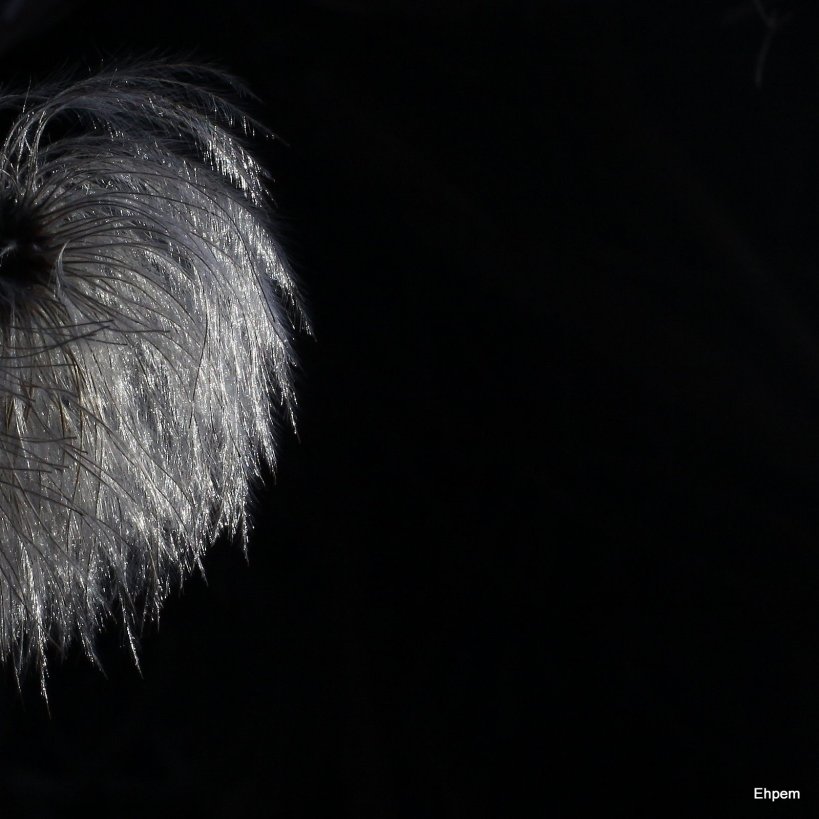 Yet again I have stopped to photograph the clematis seed heads at the end of a morning of photography along the Harling Point waterfront. They are just down the street from my house so I often pass by on my way back. This was on Friday, after taking some long water exposures at sunrise (which I expect you will see some of later this week), and then the lichen-on-chimney shots that I started showing yesterday. I had set my tripod down at the end of the driveway and was photographing from behind the hedge when my neighbour walked through the gate that passes beneath this clematis. I gave her quite a fright I am sorry to say. She had come to see why there was a tripod in her driveway and move it to a safer location until the owner came back for it.

She told me a funny story of how a photographer relative of hers was visiting recently and how he was in the garden along the fence line trying to get pictures of berries, causing the neighbour to call the police, thinking he was a voyeur. Urban photographers face such different hazards than the nature buff who tries to capture a mountain goat on the side of a cliff lit by the polar lights while being hounded across a steep and pregnant avalanche chute by a pack of wolves with a ski harness about to give way and unfeelingly dropping minor body parts, such as ears, as frostbite sets in. Rough as that kind of shoot is, and tough as they certainly are, at least wilderness photographers don’t have to contend with gun-toting police, radios and Kevlar crackling with menace, breathing heavy fumes of coffee while on a mission to keep a sleepy municipality clear of vermin like them.

Ouch (shakes head). Not sure what happened just then – intracranial aurora perhaps.

Getting back to my reality – I have posted pictures of these seeds from this same plant twice in December – Seedy Clematis and Clematis Seed. I find it interesting to watch the seeds slowly deteriorate through winter, although they retain their beauty and fascination and are an awfully fine stand-in for blossoms. I can’t believe that they have survived last week’s storms so well, nor a couple of months of winter.

I had never looked at clematis seeds closely before, let alone as a ‘longitudinal’ study, so this is another example of the benefit of viewing the world through the eyepiece of a camera. Notwithstanding biting frost, canids and ursines.