A recent post of mine, Goose Stubble, elicited a conversation in the comments section about how this image could be improved. Lynn Wohlers (bluebrightly) suggested:

“You could try cropping even more off the top, making them even higher in the frame, and maybe cropping a bit from the left, even taking half the first goose out, which would echo the last one on the other side, if you get what I mean.”

So here are a few variations on her suggestions. Above is a different image, with the pumpkin field along the top, and a light crop to both sides to get some symmetry with the marginal geese (they are better arranged for this purpose than in the previous image I posted).

Below is the image I posted before. 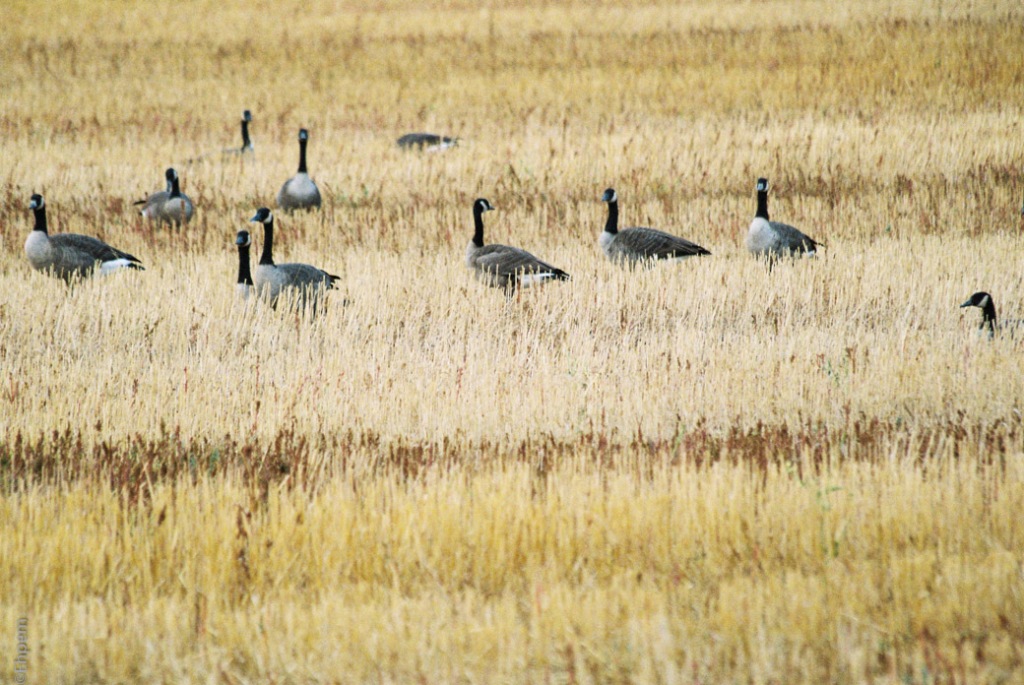 Next is the original image without any crops other than those done when framing the shot (the viewfinder on this camera shows about 90% x 92% coverage, so things cropped out when framing, can reappear, depending on scanning margins and other variables).

The original framing satisfies some of Lynn’s suggestions, but I was not pleased with the width of the out-of-focus strip at the bottom and had cropped it out. Wanting to retain the original aspect ratio, this meant losing one of the marginal geese – I like the one sitting down and mostly obscured on the right, partly because it is seated, but partly because it is the best focused of all the geese. The goose on the left is just a blob, and I did not mind losing it. When it comes down to it, the fewer Canada goose bums in the world the better.

Below are a couple of crops made without preserving the original aspect ratio. I rotated them a touch to bring the basal brown line parallel with the photo frame, and I cropped out the goose on the left. I am generally too orderly (those that have lived with me just snorted uncontrollably) to put up with a decapitated goose on the left, so did not take that suggestion of Lynn’s – it would bother me.

I think I like the last one the best, even though it is verging on too symmetrical, and has no seated goose – I think I cropped both the left and right geese out in the viewfinder, so this would be the closest to my original vision. The penultimate image has an aspect ratio that seems a bit too skinny for this image. Perhaps what makes the most difference is straightening the “horizon”. And just maybe image I lead with is the better one with the strip along the top balancing the one at the bottom, and with the marginal geese looking towards the middle creating a better dynamic.

Feel free to weigh in below in the comments. Thanks to Lynn for inspiring another look, and for her steady stream of comments in general!