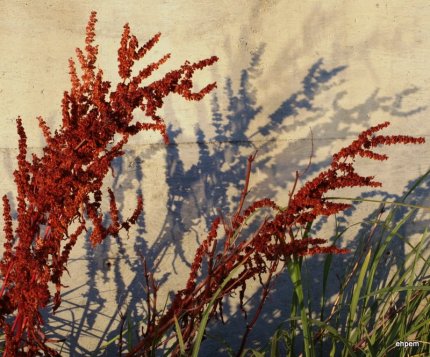 This is a place for me  to post photographs of and sometimes observations about my surroundings.

I started this blog in September 2011. Since then I have posted every day – how long daily posts continue I have no idea, but sometime it surely will slow down.

I can be reached at ehpemm_at_gmail.com. If you would like a print, contact me and we can discuss what you want. See also use of images section at bottom of this page.

My pictures are often taken with a digital camera, but since the end of 2013 I have shot film which is ever more common on these pages. Check the bottom of the post for information on the camera, lens, film, and exposure (if recorded).

Most digital pictures are usually taken with a Canon EOS 5D Mark II. I am most likely to use a ~40 year Nikkor-N pre-AI 24mm/f2.8, a Canon EF 50/f1.4, 100/f2.8 macro, 16-35/2.8 zoom. Other lenses that sometimes get used, especially for timelapse photography, are old screw mount (m42) Pentax lenses including a SMC Takumar Macro 100/f4, 35/3.5 (m42) and 200/f4 (m42). Can you tell I used to shoot with Spotmatics? I bought Takumar gear in the 70’s and 80’s – the first Spotmatic in 1974, the last lens ca 1984. Recently I have acquired a few more lenses when I come across them in thrift stores. I also use a Canon FL Bellows unit with a Canon FD mount and 50mm/f3.5 macro and other bits and pieces for higher magnification macro work. I am very pleased to have a DSLR that will take many of those lenses, and allow me to buy affordable, if old, high quality manual lenses that suit my needs.

My film pictures are usually taken on small, pocketable cameras made by Olympus. One of my favourites is a ca. 1960 Olympus Pen half-frame camera. It is totally manual, without a light meter, and with a fixed lens. Each frame is one half the size of a normal 35mm camera, so a roll of 36 will produce 72 or more individual images. I have experimented with making a single picture from multiple adjacent frames. You can find out more about the camera here, and see pictures here.

I am also using an Olympus XA and Olympus XA2 quite often. They are about 25-30 years old, small black plastic cameras with a clamshell that closes over the lens and turns the camera off, locks the shutter release, and so on. They are marvels of design, conceived by the same person that thought up the Pen, another revolutionary camera for its time. Both have a very good glass lens. The XA is an aperture priority camera with focus control. The XA2 is point and shoot with 3 focal distances. You can find information about the XA here, and pictures from the XA at this link. For the XA2 look here for info, and here for photos. Another favourite camera is an Olympus mjuii (Stylus Epic in North America). It is very small, has excellent optics and some very useful features like a spot meter. But of course, I shoot a lot of other cameras too because I like to try out cameras that I find for a few dollars in thrift stores.

When not shooting with pocket film cameras I might be seen going totally the other way with a medium format Mamiya M645 Super with an 80mm/f2.8 lens. It is totally manual without a light meter (at least for now, one can be added) and so I usually shoot it with the sunny 16 rule as adding a light meter to already full hands is not really on. This is a recent purchase which is very interesting to use as it changes, yet again, the way that I take pictures. Knowing there are only 15 shots on a roll of film is part of that, but more so the heft and feel of the camera, the wonderfully clear view finder, the racket it makes when taking a picture (the shutter and the power winder combined sound like a passing train). Overall there is nothing subtle about this camera, and so my picture taking has to accommodate that as well, especially when photographing people, which this camera excels at.

Occasionally I shoot with other film and digital cameras. The film cameras include a 1920’s Kodak Vest Pocket Model B that belonged to my grandmother (I think), a Yashica rangerfinder with fast lens, my Spotmatics, some Nikons and other cameras that have come my way by various means. Miscellaneous digital cameras include my wife’s Canon G15 and a work Olympus OM-D EM-1.

My go to SLRs these days are Canon EOS mount camera like the Elan II, IIe and 7N, and the EOS3. They use the same lenses as the DSLR Canon 5Dii which include most of my best lenses, hence the attraction.

I get reblogged from time to time and usually am appreciative of the compliment. However, if a reblogger appears to be profiting from my work I will ask them to take it down or arrange for payment. I may or may not allow the pingback to show on my blog.

If you want to use my images, ask me. I am usually going to say yes. If it is for commercial purposes, be prepared to discuss a fee. I can supply better resolution files for most of them. Email to ehpemm_at_gmail.com for permission.

If I discover my images used without permission I will send a demand for payment – my fees are higher for retroactive billing to compensate for the aggravation.