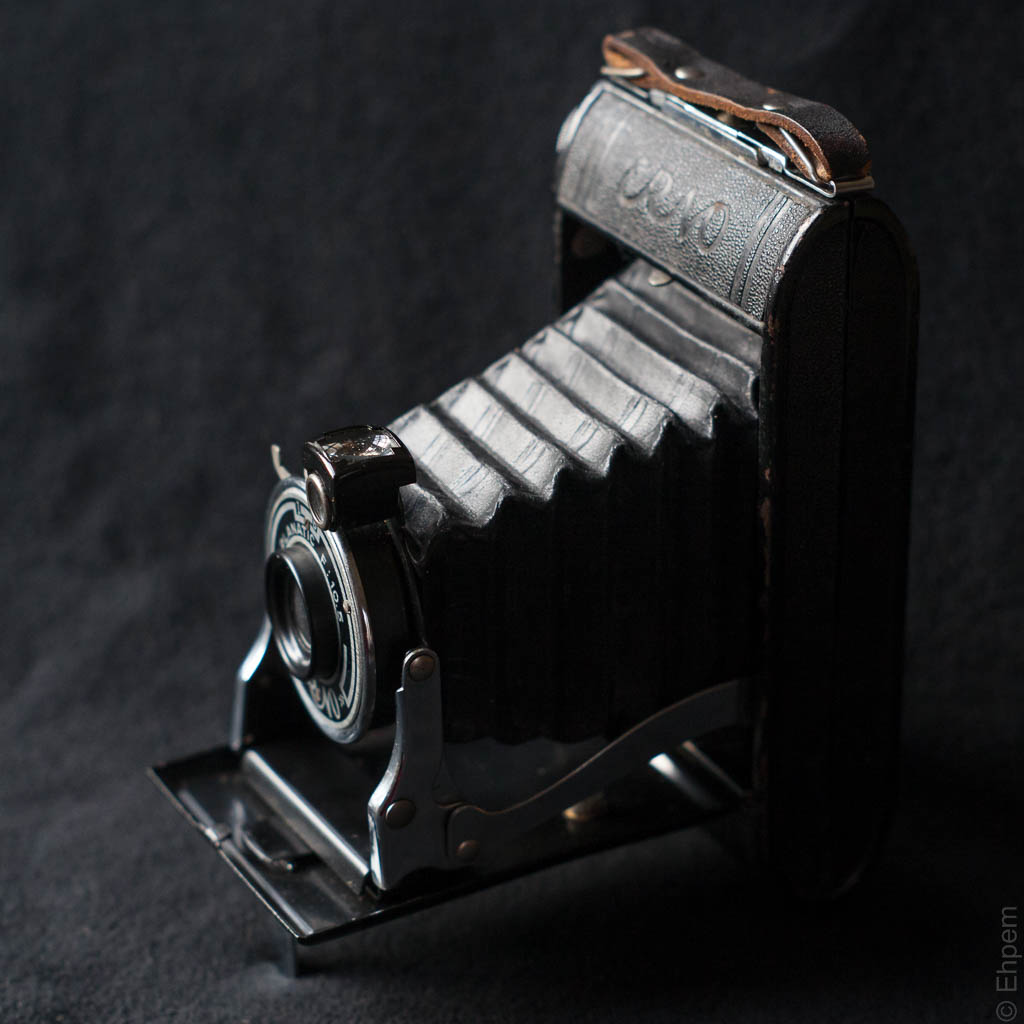 This Bencini C.M.F. Erno folder came in a bag of 35mm film cameras I bought a few weeks ago. The Erno appears to be quite rare, if the internet can be relied on. And this one seems to be a previously undescribed variant of the few others that I can find reference to. For that reason I have presented lots of detail about the camera. I have run a roll of film through it, and include one image in this post – all the images are in today’s 52Rolls post at Testing a Bencini C.M.F. Erno

The Erno shoots 6×9 cm negatives on 120 film. It has a single aperture of f10.5, a “B” (bulb) setting and an “I” (instant) setting that appears to be about 1/30th second. The aplanatic lens has a focal length of 105mm and seems very simple though there might be more than just one piece of glass, separated by air. The bellows have only one position when extended so the camera is fixed focus. The viewfinder rotates for landscape and portrait orientations but is small and difficult to use, even though this one is still quite bright.  There are tripod mounts for both landscape and portrait orientations, and an inlet for a cable release to fire the shutter. The shutter release is on the top right of the lens when holding the in portrait mode and works well in that orientation. In landscape mode it is difficult to press the shutter all the way.

Several more photos taken with this camera on my 52Rolls post here.

The main source of information for this camera is “The Great Book of Bencini” (Il Grande Libro della Bencini) by Donato Consonni – the Erno page is here (link). In that reference are two variants of the Erno, and then at a subsequent entry (link) a third which really seems a minor variation of the second version that Consonni describes on the main page. The Erno model is dated to ca 1945-1947 and overall given a rarity classification of 8, with 9 being “very rare” (link) and an undated value of 100 Euros. Dating is discussed in this slightly awkward google translation (link):

“Surely it was manufactured after World War II; this certainty comes from two things:

I believe that this camera is variant the first version that is described here. The differences are that it has no English wording on it, the rewind knob has unbroken knurling,  it does not have the folding frame-finder on one side (there is no evidence that one was removed), and there is no rivet or decorative lump on the bar beneath the lens that is used for releasing the bellows when locked open.

The frequent presence of English on these cameras and the style of rewind knob seem to be the main lines of evidence that this camera came into production after WWII. I am not familiar enough with Bencini cameras to know what all the earlier rewind knobs look like but I have seen pictures of some early 1940s models such as the Etna which has a rewind knob identical or at least very similar to this one. The Etna also seems to have a plain bar beneath the lens.

The camerapedia entry (link) says about Bencini that it was “Founded by Antonio Bencini, in 1937 as I.C.A.F. in Milano (Italy), the company shortly changed its name to C.M.F. After WWII it was renamed again, to CMF Bencini, the name under which it became renowned for its characteristic rigid body cameras.”

Another source (link) says that “Bencini founded another company in Milano, Italy, originally called I.C.A.F., which produced Argo, Delta, Eno, Gabri and Robi cameras. The name was subsequently changed to C.M.F.–Bencini in 1946, and then simply to Bencini around 1953.”

Camera-Wiki gives the history (link) as “The company was founded with the name ICAF in 1937, in Milano, Italy by Antonio Bencini. … Shortly before WWII, the company name was changed to CMF. During this period, the company introduced the Etna and Argo cameras but soon ceased producing cameras in order to manufacture airplane components for the war. In 1946 the name became C.M.F. Bencini Later, in the early 1950s, the name was changed again to Bencini S.p.a..”

In other places there is uncertainty about when the Erno was produced with conclusions of probably early post-war. In this video (with 7:49 left to play) on Facebook the camera is dated to 1939. Perhaps this camera is an early version, either intended for non-anglophone markets or even a pre-war or WWII version. Some differences that it has from the other Erno’s that I can find described in enough detail are similar to the Etna which may have been produced only from ca 1940-1942 and to an early variant of the ICAF Delta.

EDIT: I sent this information to Donato Consonni the author of the Bencini History website. He agrees with my observations about the dating of this camera as possibly early 1940s, and was interested to see photos of another one I had come across that sold in Saskatchewan in 2011 as something in between my camera and what he described. In addition, when discussing my camera with another Bencini collector, that person showed him yet another Erno variant. Consequently, he has amended his website with a new page that includes my photos and pictures of the other new finds, and a table of features and possible dates – this camera is Variante A1 on the table, the Saskatchewan sale is A2. You can find that page here.

This camera has a few problems – a bit of surface rust where the black paint has peeled of, a slight lifting of the paint on the pressure plate, probably from underlying rust, slight scuffing and edge lifting of the leather covering and so on. The biggest problem is that one of the brackets that holds the bellows open is detached from the frame of the camera and I don’t think it can be reattached without removing the bellows. Otherwise, it works as it should – the bellows are light tight, the shutter fires properly and it makes pictures. There is a bit of dust inside the lens that suggests a two part lens, though perhaps one is just a glass cover. I will see if I can get at that to clean it, but not if it is going to be tricky. The back of the camera is a bit loose when closed, but does not leak light. All in all in good condition. 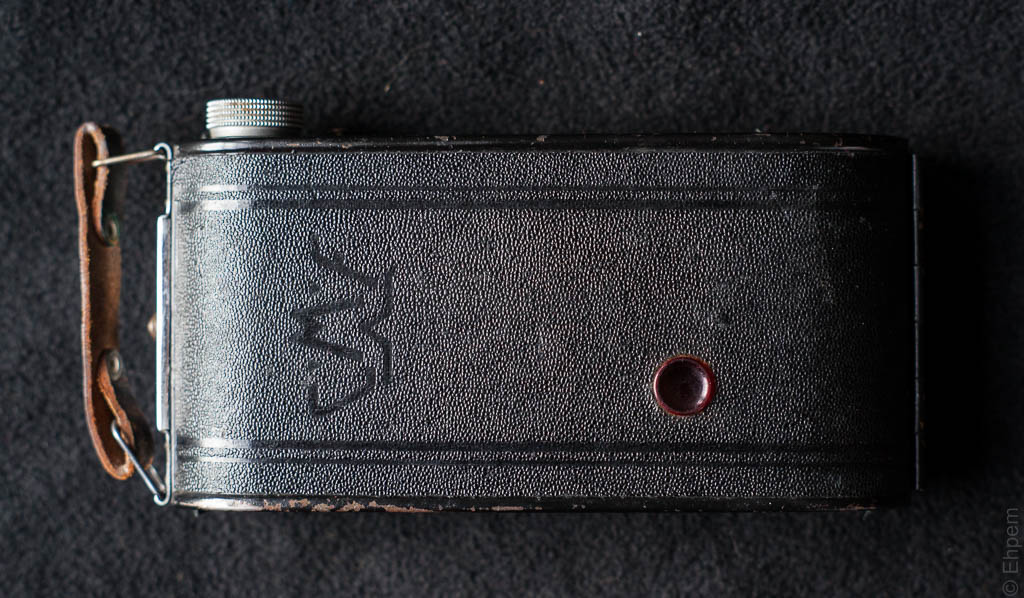 To open larger images from the gallery click on any image below and the navigate with the arrows to the others.