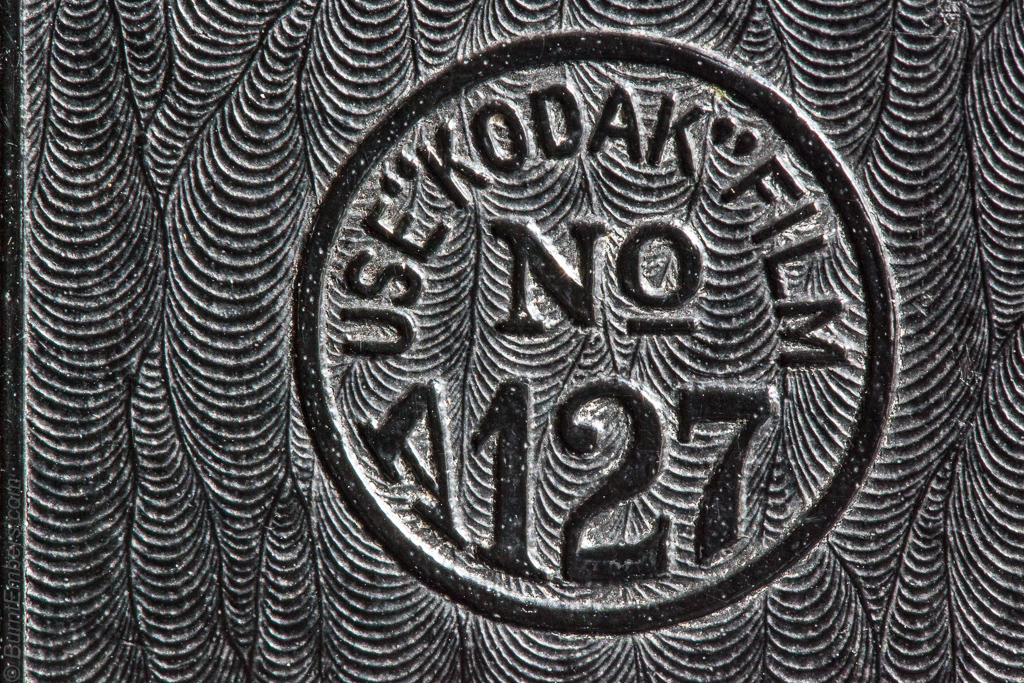 I was recently given this Kodak Vest Pocket Model B folding camera. The gift was from my parents but they do not remember where it came from. The best guess is that it was in a shipment of stuff from my grandmother sent from England in the 1970s and that most probably it was her camera.

These cameras were made from 1925 to 1934 which fits nicely with the years my grandmother was back and forth several times to India (one of my uncles was born there in 1927; my father in England in 1929. My grandfather, whom she met in India in the early 1920s and married in 1926, was stationed there into the early 1930s). Some sources say the Vest Pocket Model B did not include the autographic feature after 1930.

This camera is in excellent condition. It has the original canvas case slightly worn, and while a bit dusty (I did not clean it before taking this photos) and with very small oxidation around metal parts and a bit of rubbing it is in remarkably good condition considering it is 80 to 90 years old. In many respects it is a beautiful object as I hope you will see in the photos in this post. The camera is very small (in outline it is smaller than my Samsung s4 cell phone, though about 2.5 times as thick), especially for its time and is thus ideal for travelling. Not only does it fit in a vest pocket nicely, it easily fits in a purse as well. So, I think it is my grandmother’s camera, but I will probably never be certain.

This is an autographic model of camera, one that allows marking the negatives with a short note between shots, but I know of no negatives in the family collection that have been marked this way. If we do find negatives of the right size with her handwritten notations, then perhaps we can be more certain it was her camera. The stylus was intended to be used to open the autographic slot on the back of the camera, and it is clear from the scratches around the knob in the slot that this was done quite often and thus there should be negatives from this camera that are autographed, somewhere. 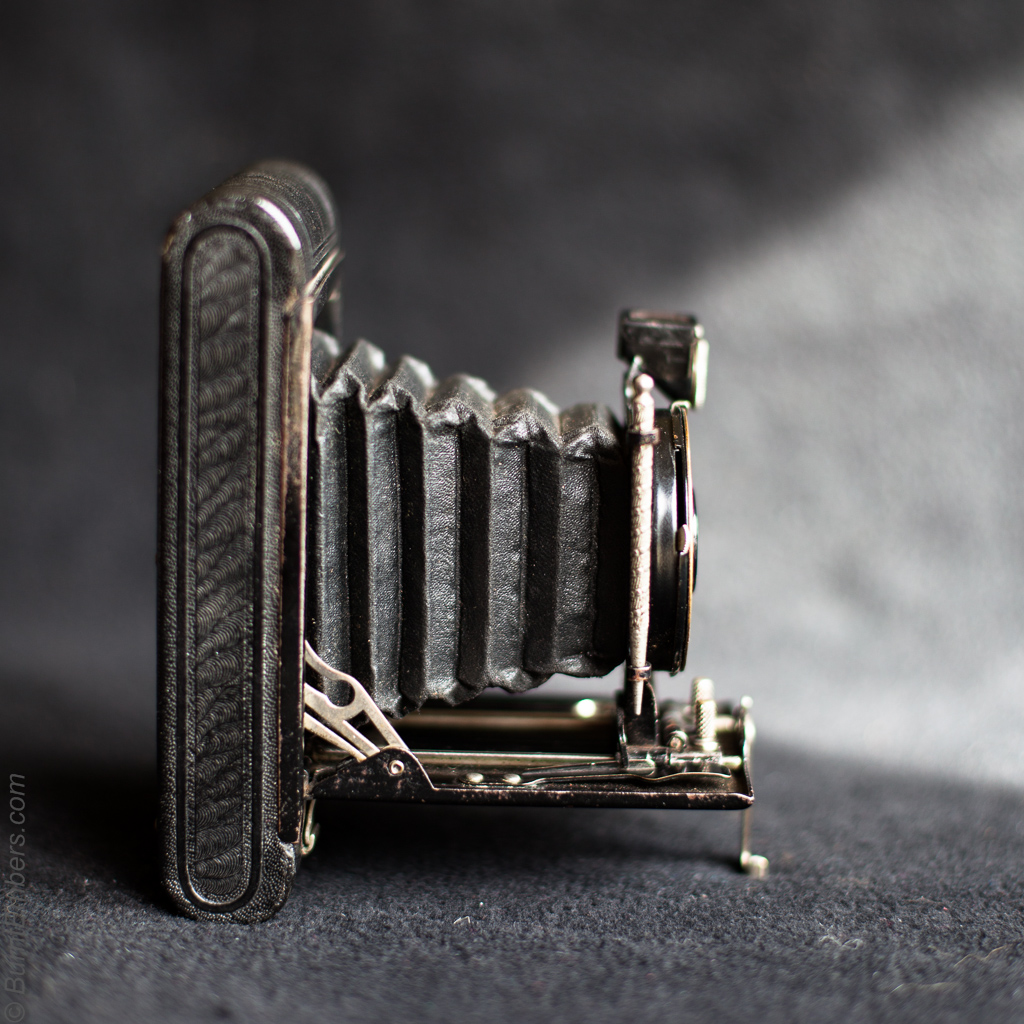 The camera uses 127 roll film, which as far as I can tell recently went out of production with the closure of the Fotokemika factory in Croatia, makers of Efke brand film, as well as some of Macophoto and Jessops films. There are on-line rumours that other companies are going to start making film in this size, but nothing seems certain at this time. At least one company is cutting down 120 film into this format from film made by other manufacturers.  In any case, my local used camera store had three rolls of Efke 127 ISO100 film when I was first looking a couple of months ago. After confirming that my lab can process 127 film, I have bought one of the three rolls and will be running it through this camera once I have given it a good cleaning, and when lighting conditions are ideal.

The Vest Pocket B makes 4×6.5cm negatives, but 0.5 or so of that was dedicated to the autographic feature so the exposed negative is 4x6cm which is at the smallest end of the medium format size range  (the most common medium format film is 120 and it is 6cm wide by varying lengths depending on the camera). Autographic film was wrapped with a thinner than usual backing paper with carbon paper sandwiched next to the film – these papers could be scored through by writing with a metal stylus in a gap that opens in the back of the camera, and then exposing the open gap to bright light for a few seconds. This scored marking on the papers leaked light through onto one margin of the negative, branding it permanently with the original form of EXIF data. It is an ingenious system, but was not very popular and Kodak stopped producing autographic film in 1932. The stylus for marking the film is held by friction in two slots to one side of the side of the lens. The knob in the sliding cover on the back of the camera has a hole in it for the tip of the stylus. 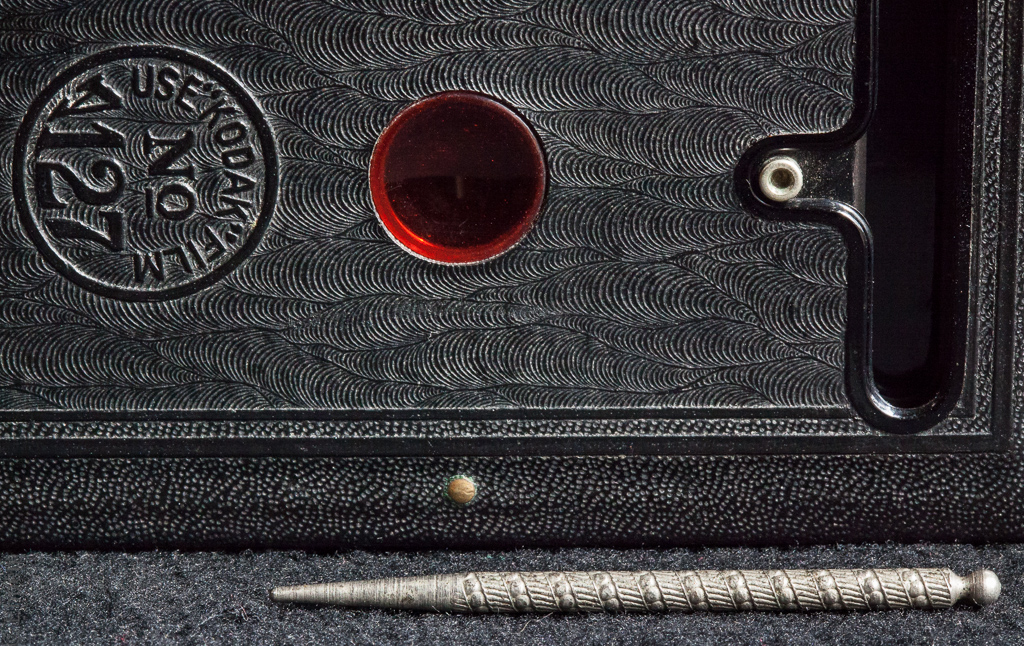 This camera has one shutter speed on the “I” setting (Instantaneous), as well as a “T” (Time) setting where the shutter stays open until it the shutter release is pressed again. The shutter release fires the shutter both when clicked downwards and upwards.  Others have tested, or at least published, that the shutter speed is 1/25th of a second. My local camera store could not get a reading of the speed since the f-stop is small and does not let enough light through to test it. However, the guy helping me said it looks to be about 1/30th (I had not found the info at that time about it being 1/25th) and when I compared it to a couple of cameras at home, I have to agree that it is around 1/30th. I will treat it as 1/25th for exposure calculations, not that it makes any real difference if it were 1/30th.

The aperture has four positions, marked unhelpfully as 1, 2, 3, and 4. They are set by rotating a dial on the side of the lens casing, which moves different sized holes in front of the camera. On-line sources suggests that these correspond roughly to f11, f16, f22 and f32.

Framing the photo is done by looking down on a view finder lens. The viewfinder can be rotated 90 degrees for landscape and portrait orientations.

The outside of the plate upon which the lens slides out has a tripod attachment, seen as a hole that goes through into the folded up camera.

To load film the whole front plate including the lens and bellows unit lifts out of the camera body, exposing the hollow back and slots for the film spools. The winding knob pulls out to release the film spool. Once the film is in place, the front of the camera is re-attached, the film advanced to the first frame and shooting can begin. At the end of the roll, the film and it’s paper backing have wound onto the take-up spool, which can be removed from the camera and sent for processing. 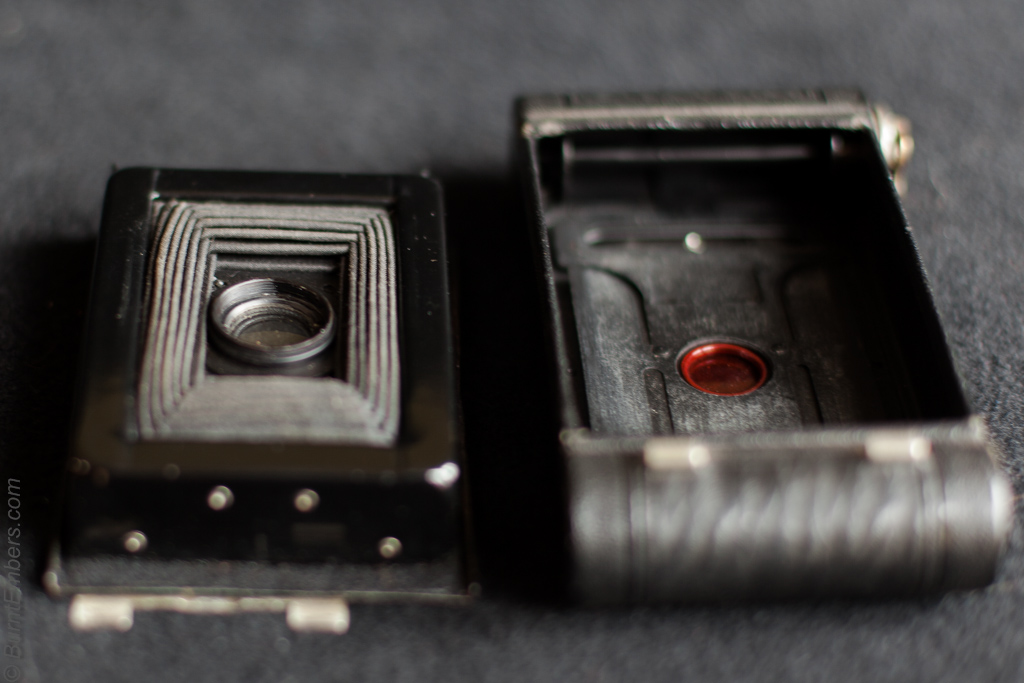 The Sunny 16  rule suggests that I can just get away with using ISO100 film on a sunny day, shooting at f32. The camera manual which by inference appears to have been written for ~ISO12 film, makes it clear that shooting in shade on a bright day is where this camera performs best, and the camera should be shaded with the sun behind or over the shoulder of the photographer to avoid lens flare.

I am guessing that this camera probably takes decent pictures when they are taken with care in just the right conditions. I am looking forward to giving it a try, and hope that the lens is clean enough and there are no light leaks, or any of the other myriad of confounding conditions that come into play with old cameras. I will use a light meter to be sure of the exposure, keep my back to the sun, shoot when it is bright with soft shadows but not brighter, try to keep it in the f16 to f22 range as being most likely the sweet spot for the lens. There are only 8 exposures on the roll of film. If I get a couple of decent shots, I will feel like I am did OK. I have got the materials I need to make a negative holder for my scanner as they don’t come this size. I probably won’t use it again since film is hard to get hold of, and expensive, and the camera is quite limited in its simplicity. But it will be fun to try, and who knows, it might take good pictures and I might get hooked on the idea of a pocket-sized ‘medium format’ camera. And a camera where it is so easy to make double exposures, or multiple exposures with partial advances of the film. Hmm, now that I think about it …..

Wish me luck, it feels a bit like an adventure to make this thing go.

To open the gallery below, which has a lot more photos, click on any image, navigate with the arrows and escape to return to this page.

If you are on a mobile device and only one image opens at a time, then you are not properly in the post but rather are trapped in a WP Reader purgatory. You need to tap on the post title to open the post properly and then find your way back to here and try again. 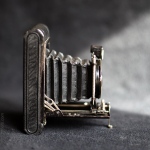 Open, but not extended

Open but not extended

Detail back of camera 1

Detail back of camera 2

Camera opened up for inserting film

World patent stamps inside back of camera

USA patent stamps inside back of camera

Back of camera, autographic slot closed

Back of camera, autographic slot open.

Edge of camera with winding knob.

Detail of end of camera.

Camera in its original canvas case with leather strap.