Cat number 2 passed away last night. She was having quite a few different complaints and in sum there was nothing left that could be done. She was quite a bit older than we had supposed and she had a few tough years which likely took their toll.

Cat number 1 will not mind one bit, but her humans will miss cat number 2. Even though she was exceptionally timid and rarely (as in maybe 4 or 5 times in total) approached us for a pat, she was approachable under particular circumstances (when asleep and she was relaxed) and we would pat her a few times a day when we could find her latest sleeping centre.

She found the strangest places to sleep. In the shot below she is curled up on my son’s double bass – a place she used for a week or two until the bass had to be moved.

The third shot is taken near dinner time, when she would appear and even mew a bit sometimes, in chorus with cat number 1. Feeding was pretty much the only time the two tolerated each other being within a few feet. However, they did stand shoulder to shoulder at the cat door to fend off intruders, raccoons included. So there was a mutual acknowledgement of co-ownership of the house, though they subdivided it to suit their needs.

The top shot is the sunny front window. She liked to get behind the curtains if they were drawn, and sit for hours watching the world and soaking up the sun.

Today I will dig a grave for her in her favourite sunny spot, one she used even on the frostiest days – she loved being outside in the sun. It is under the edge of the apple tree and near to a hedge well suited for a quick escape if needed. She was happy to share it with the deer – less nervous of them than of us. 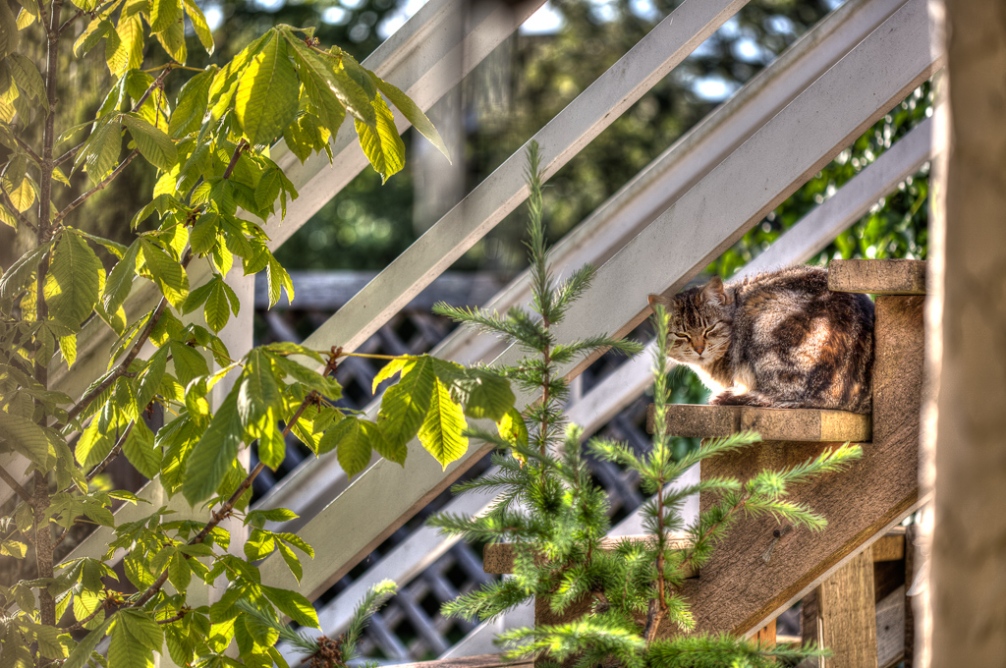 This last picture was posted when she first decided to move in with us – you can find the story of our adoption by her at Cat Number Two. Being so skittish, I don’t have many useable shots of her and almost all are taken with a 100mm lens as anything shorter put me too close for her comfort, and in every single one she is watching me, alert to the need for an escape. Her nickname around here was Skitterkit because of the way she skittered through the house when coming and going so as to avoid any attention from us.