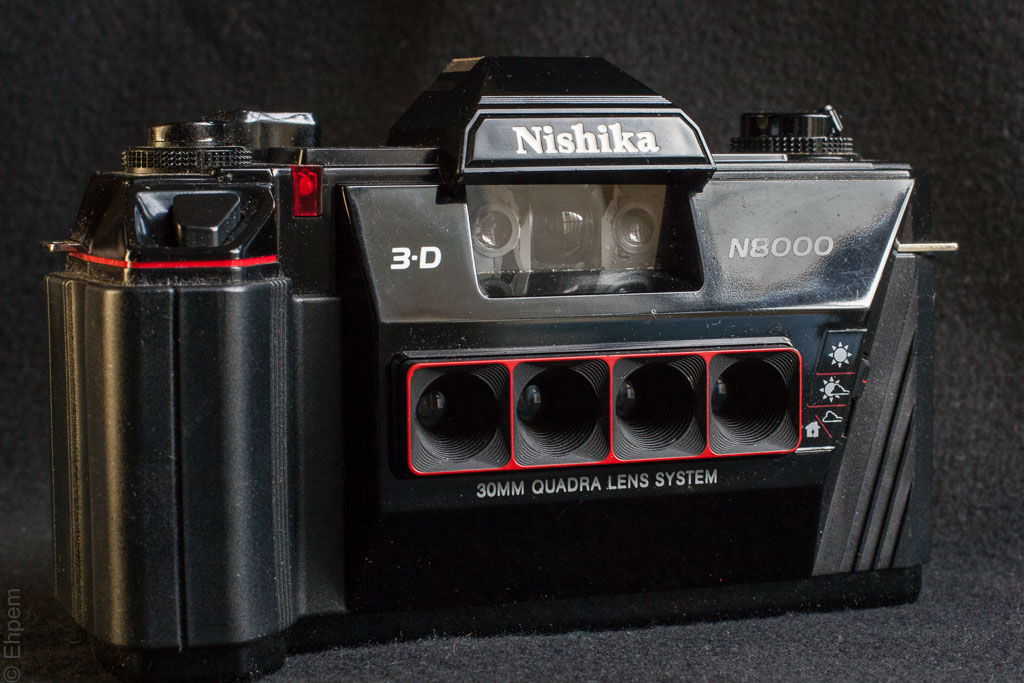 I came across this fraudulent and otherwise hideous duckling in a thrift store and was unable to resist. It was overpriced, which is consistent with historical precedent for this model. The Nishika N8000 was designed to take photos that could be made into lenticular prints – expensive layered 3D images that were available through their plant in Nevada and a few other places as the camera become somewhat popular. Since they have, unsurprisingly, gone out of business getting such prints made is next to impossible now, although there do seem to be options to get prints made from scans (here). These cameras are still available as new old stock, but there is a web page dedicated to pulling apart the marketing hype that accompanies these cameras, and this one gives some fascinating history of the original marketing fraud (here, page 86-87) used to sell them. Then there is the camera itself, a study in fakery, which I will get to in a minute.
This is the sister post to one at 52 Rolls which has more of the testing results (some are below as well) and not much about the camera. Check that post, From the Ridiculous, for most of the results from this test roll of film, including several animated gifs.
So so why did I buy this camera? Impulse mostly as it must be the only camera ever made with the word Quadra on the front, which rings bells for me since I am spending a lot of time doing research on Quadra Island these days and before that worked for years from an office on Quadra Street. Well, actually, it’s superior progenitor the Nimslo 3D also says Quadra on it, so it is one of two, but I doubt I will ever cross paths with a Nimslo. I did also have an eye on the possibilities offered by groups of four nearly identical images, and for $14 it won’t be a huge waste if it doesn’t work out; the batteries in it were still good, for what little that is worth. Sounds like a bunch of excuses for impulse buying, and that too is true, but there is no buyers remorse as I write this, having yet to see the results of my test roll.

The camera shoots four half-frame images at a time (using two 35mm frames worth of film per shutter release) and thus a roll of 24 will produce 12 groups of four images. This means adjacent frames from different shutter clicks can be scanned together without wild aspect ratios so it is possible to take, for instance, two associated sets of images and then to scan the adjacent two frames from each set to create different kinds of image combinations from those I have been making with my half-frame Olympus Pen (examples here).
If I want to go the distance I could also manipulate the images digitally to create 3D versions usable with 3D glasses like they hand out in movie theaters. Or set them up to use with stereoscopic glasses like those for air photo interpretation or viewing 19th Century stereo photos. I suppose I could also use them to create 3D digital models with the right software. And people do make gifs from them (see here) which looks like it could be fun, with the right subject.
But first, I need to know whether the camera is any good and that seems highly unlikely because:

By now you are thinking is there anything to recommend this apparent atrocity? Well, apart from the four simultaneous portrait oriented half-frame shots there are a few useful features which stand out in context of the above list (translation – features normal in many cameras of the era):

For many reasons, parsimony not among them, I loaded this camera with film and gave it a try. I wanted to test the camera with the recommended film speed, just to keep the variables under control while analysing the results. I could not easily locate a roll of ISO 100 C41 processed film, colour or black and white (C41 being the least expensive for commercial processing). So, I put in a roll of Ilford Delta 100. The film is not too pricey in this area, but the processing is and I am not yet set up to do my own (see what I mean about lack of parsimony?). I am hoping that there is enough latitude in this film to forgive some poor exposures, and that it is fine grained enough to compensate for the half-frame sized negatives. The commercial labs do not have masks in their scanners that would allow a single image with all four frames which meant I had to spend a whole bunch of time digging my study out from under a house guest’s things so I could use my scanner. Why is it that this camera seems a catalyst for work?

So, I wrote the above 6 or 7 weeks ago when I first got the camera, but before I had a chance to scan the film. As it turns out, the space between groups of frames is quite large (and highly variable) and this means that the film strips are just a but too long for my flat bed scanner’s film holder and I had to flip the negatives after scanning two out of three groups on a strip in order to get all of the third group in a scan. So, that adds a lot to the work of scanning.
I am pleasantly surprised by the image quality. I was not surprised by the vignetting, it has been commented on by other users. Exposures were a bit of a challenge, and I sometimes forgot to change exposure compensation and generally pushed it a bit hard for the available light. But overall, there is something in each group that I can like. I especially like the repeating nature of some of the images, mostly on the most simple graphic compositions.
.

To see an enlarged version of any image in the gallery below, click on it and then navigate to others with the arrows or swiping. 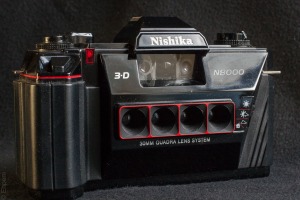